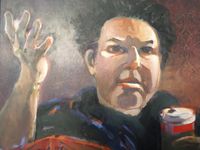 Mav’s Taphouse, a family-friendly spot with 25 taps of craft beer and cider as well as a well-rounded food menu recently opened in the space formerly occupied by the Old Ivy Taproom at 108 W. Evergreen Blvd.

The business is named after owner Calista Crenshaw’s 4-year-old son, Maverick. Mav’s dinosaur logo comes from Maverick’s love of dinosaurs and Crenshaw’s desire to create a family-friendly space. “I love beer and I love my son and we like to go places as a family,” she said.

After decades of serving food and drink, Crenshaw wanted to open a gathering space in downtown Vancouver. “I sent the Old Ivy a Facebook message, I never really thought he’d sell it to me. In the end, I think he trusted me with the space,” she said.

Mav’s has three main areas — the taproom, an outdoor patio and a game room filled with some rare pinball machines and video games. Children are allowed in all the spaces except for the stools at the bar. Pets can sit with their owners in the outdoor patio space.

Crenshaw updated the taproom by applying a fresh coat of white paint to all the walls, adding minimalist tables and chairs, streamlining the bar area, and changing the lighting fixtures for a clean, modern look.

In the ivy-covered open-air patio, Crenshaw added white tables and pale turquoise chairs that match Mav’s logo. Pinball machines and classic video games like Ms. Pac Man and Frogger, curated by family friend Chris Rhodes of Wedgehead PDX, fill the game room along with a large painting of The Dude from the film “The Big Lebowski” holding a White Russian.

The Anthony Bourdain bathroom, dedicated to the late food icon, has four walls completely covered with photos and sketches of Bourdain, as well as recipes and pages from his books.

Unlike most local taprooms, Mav’s has a full kitchen headed by a seasoned chef. Chef Paul Durazo started as a dishwasher at McMenamins in high school (where he met Crenshaw). While studying culinary arts at Clark College, he trained at Portland restaurants like Ox Restaurant and Davis Street Tavern under Katy Milland of Coquine. He was a sous chef at Pasta Gigi’s in Battle Ground. He also has a mushroom foraging business called In The Pines Foraging.

Durazo last worked as a head chef at Victor 23, but left to start a food truck serving smoked meat tacos before the pandemic stole his food truck dreams. After over a year out of a kitchen, he said he was excited to create the menu for Mav’s.

For meat eaters, there’s a machete quesadilla with spicy chicken, chili verde pork, and creamy vegetables with melted Oaxaca cheese as well as things like the High-5 Burger, a two patty smash burger with cheddar cheese, and a cubano sandwich with slow roasted pork, black forest ham, swiss cheese, and pickles. He plans on adding Taco Tuesday sometime in the future with grilled-to-order tortillas made with Three Sisters Nixtamal’s masa filled with the chef’s own signature smoked meats.

Customers can get up to the minute information about available beer, cider, and hard seltzer by checking the tap list on the business’s website. This list updates automatically through Digital Pour which is connected to all the taps. The taphouse is open Wednesday through Saturday from 11 a.m. to 9 p.m.